Invoke your spells by inputting the correct key combination while staying in the rhythm and kill your enemies before they can reach you.

After every round you can choose between two spells to add to your spellbook.

I love the concept of this game. Its hits a lot of genres niches that I enjoy mostly fighting games and rhythm. I also love manually casting spells as a game mechanic always so hell yeah with that.

It took me around 10-ish tries to beat it. The spell combination that gave me the win was frost bolt and annihilation. With the freeze ray as something that helped a lot in the later levels if I needed to hit more than 1 enemy in the row.

I'm guessing that the reasoning for this was because that moving lanes is a huge turn investment. And with how quickly you get swarmed in the later levels, you need perfect execution of the spells and minimum movement. Correcting mis-inputs is counter intuitive as you have to press a button between the beat in order to reset the input buffer.

My best recommendation for this game from a design standpoint would be to implement a combo system similar to Legend of Legaia, Where inputs that have overlapping commands at the ends can be combo'd together. This would make moving and mis-inputs way less punishing to the player AND It would make the flow of the game a lot better and increase the skill ceiling.

An example of this would be the input R0 > R0 > R2 > B0. This would move the player down and then let them finish the frost bolt command without having to input a third R0. Another example would be lighting bolt into fireball with the input being R3 > R0 > B0 > B3.

Outside of that, There could be better visual feedback for what button I am pressing. Sometimes I got my button inputs fumbled while holding and lose a lot of turns due to not realizing the mistake. I tended to look at the hold number mostly and I think if the number was colored coordinated with the button it would make the clarity a lot better. A more asset heavy answer would be moving the buttons from the left top of the timeline to the middle where the beat marker is to put within the direct vision of the player.

I think also if the beats would on the quarter note instead of the half note the game would feel a lot smoother personally.

The game needed more sound feedback for a few things like activating a spell or getting hit. It would definitely add a lot to the experience.

Also it took me a while to realize the adventurer guys absorbed a whole attack. I think maybe removing the shield from the sprite after its invul is gone would definitely help send that message across to the player.

But yeah this game is sick as hell. Looking forward to updates if you ever do! Awesome idea.

This is such a good game, so much better than mines, love the work and effort that went into this game, keep up the great work.

Interesting concept and cool approach! Thanks for sharing :-)

The chosen key/colors combinaison are inverted between start screen and game!
Also, I may have to feel dumb but I still can't move consistently and didn't manage to cast a fireball. Making one 0 seems easy but the second is rarely registered. Don't know if I just misunderstood the rules or what!

The game is still promising, but I just can't manage to play it =)

New version: several bugs corrected, and I managed to get to the 3rd wave!! :p 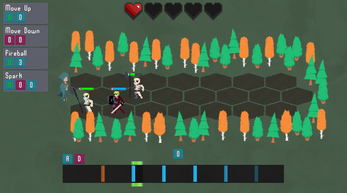